Urban living in the Downtown San Diego community has exploded.  Downtown San Diego real estate is mostly condos, town houses, and lofts.  Downtown San Diego condos are a great option for professionals who want an alternative to traditional suburban living.  Prices of real estate for sale downtown have come down in recent years, and are not high compared to major metropolitan areas in the United States such as New York and San Francisco. There are numerous high rise-condominiums and luxury apartments in the Gaslamp, along the Marina District, near the ballpark in East Village, and in Little Italy. Many condominiums have ocean views of San Diego Bay, Coronado, and the Pacific Ocean.

Recent development of downtown San Diego real estate has turned the city into a thriving residential neighborhood.  Residents enjoy the activity, culture, and good fun that comes with living in the best city in the United States.  Much of the urban renewal in downtown San Diego stems from the efforts of the Center City Development Corporation.  The CCDC is a a not-for-profit corporation established by the San Diego City government in 1975 to help facilitate downtown San Diego redevelopment projects.  Businesses and developers have worked well together to make San Diego one of the best urban living environments in the United States.  Thousands of people love living in condos in the San Diego Gaslamp District, Marina District, Little Italy, and East Village.

The Gaslamp District is in the center of Downtown San Diego.  The original Gaslamp hot spot is the restaurant/nightclub called Croce’s, owned by the surviving relatives of the famous musician Jim Croce.  At the time Croce’s was developed (802 5th Ave), downtown San Diego was a pretty rough place.  Liquor shops and tattoo parlors were the primary establishments.   The risk that the Croce family took really paid off for them and for the entire community.  If music can change the world, it certainly did help to change the city of San Diego.  Other restaurants and nightclubs soon moved in, and continue to move in at an unbelievably rapid pace.  The Gaslamp has become a tourist attraction, like Disney Land only without the cartoon characters.

Another early development in the Gaslamp District was the large shopping mall called Horton Plaza.  The Horton Plaza retail establishments include Macy’s, Nordstrom, and the entire range of smaller national franchises and specialty shops.  Recent remodeling plans call for completely refacing the shopping complex to make it more open and inviting to the public.

More recent Downtown San Diego real estate developments are in the Marina District, Little Italy, and East Village.  Many condos in the Marina District have views of the San Diego Harbor and Coronado Bridge.  East Village has a variety of newer condos near Petco Stadium. Also near Downtown are the communities of Hillcrest and Mission Hills  where Spanish bungalows and Craftsman style houses remind us of an earlier era.

Downtown San Diego has become a premier dining and entertainment district in Southern California. More than 70 restaurants offer dining experiences from that range from inexpensive to extravagant.  There are coffee houses, sushi bars, tapas bars, seafood bistros, steakhouses, and many trendy restaurants with chefs who create cutting-edge California cuisine.  Nightclubs are packed with party-goers throughout the week, with Thursday nights being one of the most popular times of the week for locals to cut loose with dancing and socializing.  The music selection is outstanding, with live shows throughout the week.  Just park and start walking.  You’ll soon discover why San Diego is called “America’s Finest City.”

The San Diego Realty Pros are here to help you explore downtown San Diego living. Contact us for more information about condos for sale in Downtown San Diego. Call direct 619-200-7621 and speak to Geoff Schiering, Broker. 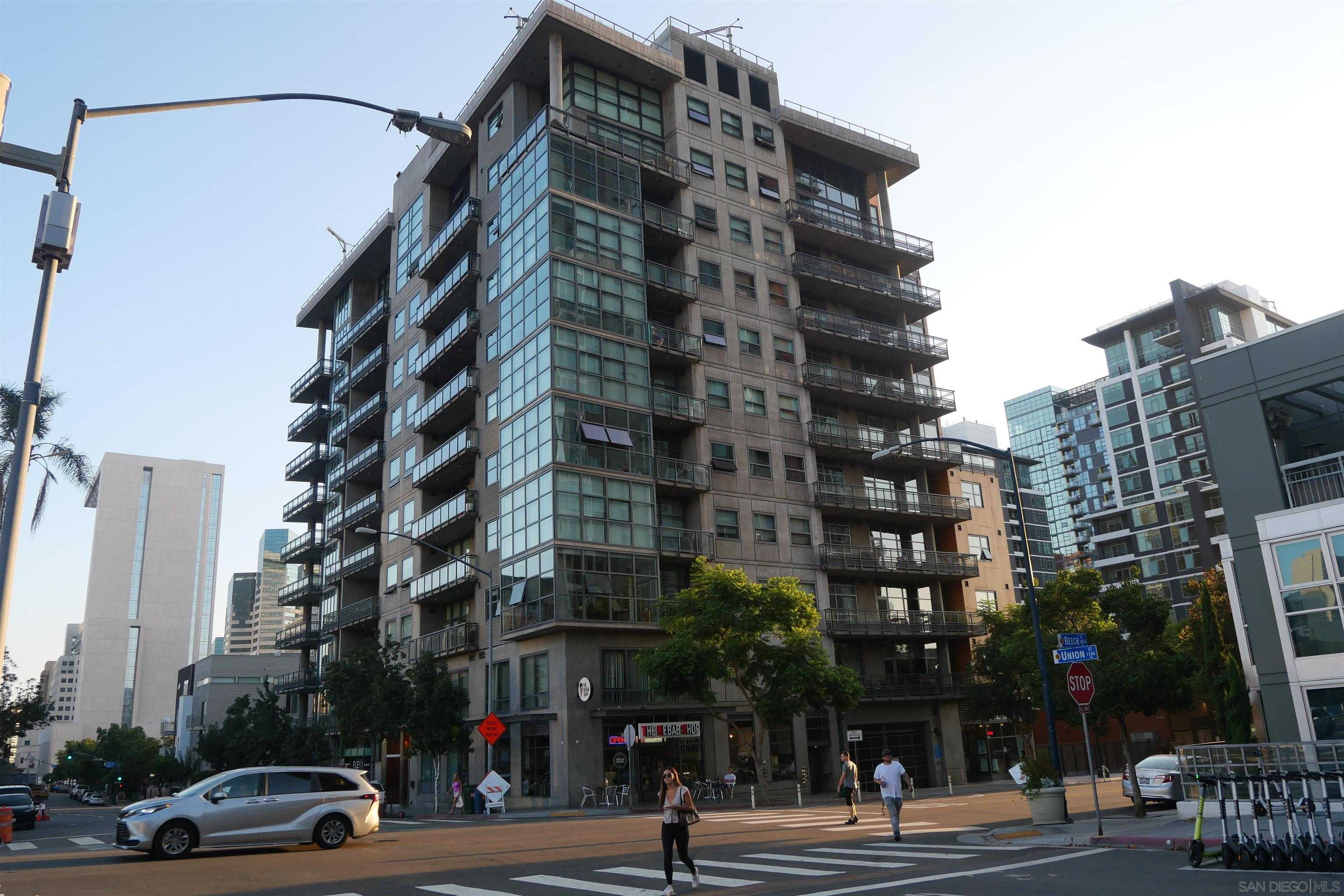 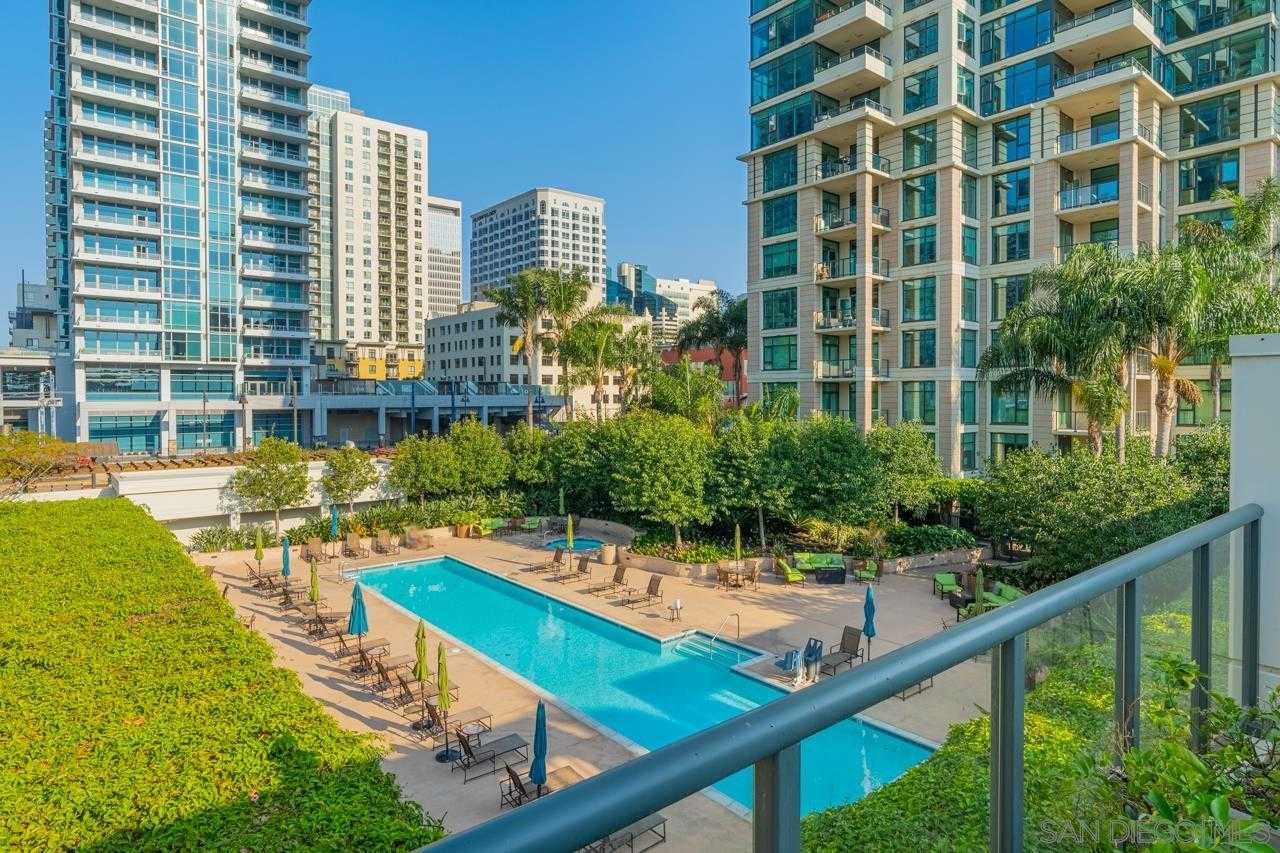 New
$1,092,000
2 Beds
2.5 Baths
1,956 SqFt
Status Pending
MLS # 210029366
Property Type Townhome
Price Type --
Pacific Sotheby's Int'l Realty
Write the manuscript of your next adventure while enjoying life alfresco from your two sprawling rooftop terraces. Draw inspiration from views of the San Diego skyline, lush motor court and soothing fountains to ships and sunsets of the San Diego Bay. Your new residence expands three levels of fine living with an open concept design ideal for entertaining or dining alfresco from one of your three terraces. Enjoy life within the grounds of the Iconic Grande North Tower.
View Property 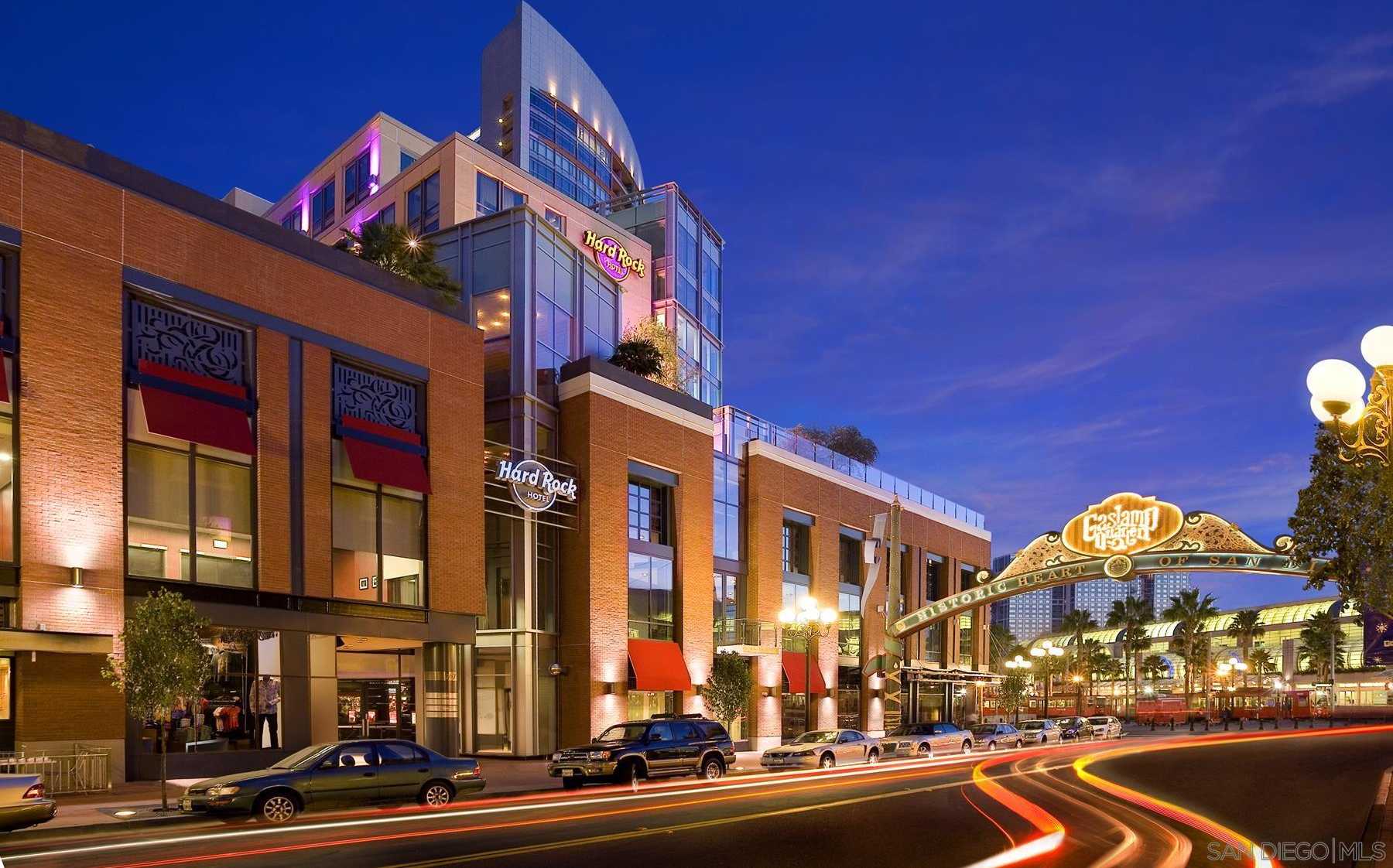 New
$265,000
-- Bed
1 Bath
337 SqFt
Status Active
MLS # 210029450
Property Type Attached
Price Type --
Berkshire Hathaway HomeService
Own California's Hottest Lifestyle in the Gaslamp Downtown SD. The Hard Rock Hotel San Diego. This is an incredible opportunity to own a piece of the Rock! A Hard Rock Studio on the 12th floor that's classy, unique and sits above it all in the Heart of Downtown SD. Amazing location 12th floor, great City Views, faces Petco Park. This unit has 2 Queen Beds, Views and Location. You can be a part of this all become Rock Royalty and own a piece of the Rock. Don't miss out on this Hard Rock unit that will make you Rock & Sizzle!
View Property 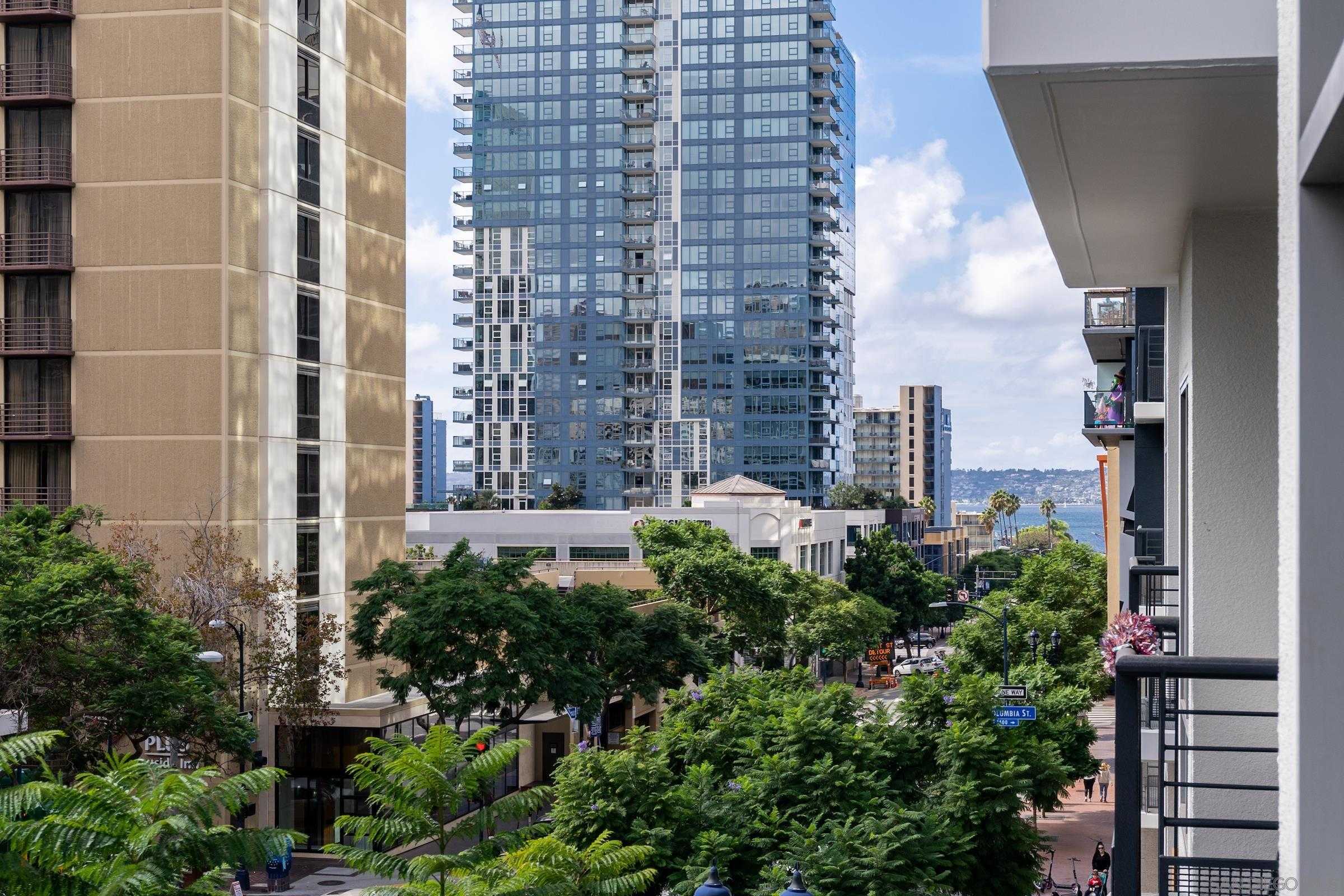 New
$599,000
2 Beds
2 Baths
1,071 SqFt
Status Active
MLS # 210029326
Property Type Attached
Price Type --
eXp Realty of California Inc
Live the best life in the heart of LITTLE ITALY in this tastefully upgraded turnkey 2bed/2bath suite; featuring vaulted ceilings with dual private balconies (South facing ocean view from the Master), brand new paint and carpet, concrete accents and chandelier/fixtures, smart thermostat and August front door-lock, and one of the most stylish units in Aqua Vista. Walking distance to Waterfront Park and Gaslamp, 5 star rated bars and restaurants, farmers market, music venues, FIT Gym, and everything Downtown San Diego has to offer. This property in the Aqua Vista is the perfect opportunity to live in style and comfort within a luxury community with Concierge and valet parking, a gym, 8th floor pool and spa equipped with a grill deck, 24 hour security, and all the amenities of one of the most sought after building in Little Italy.
View Property 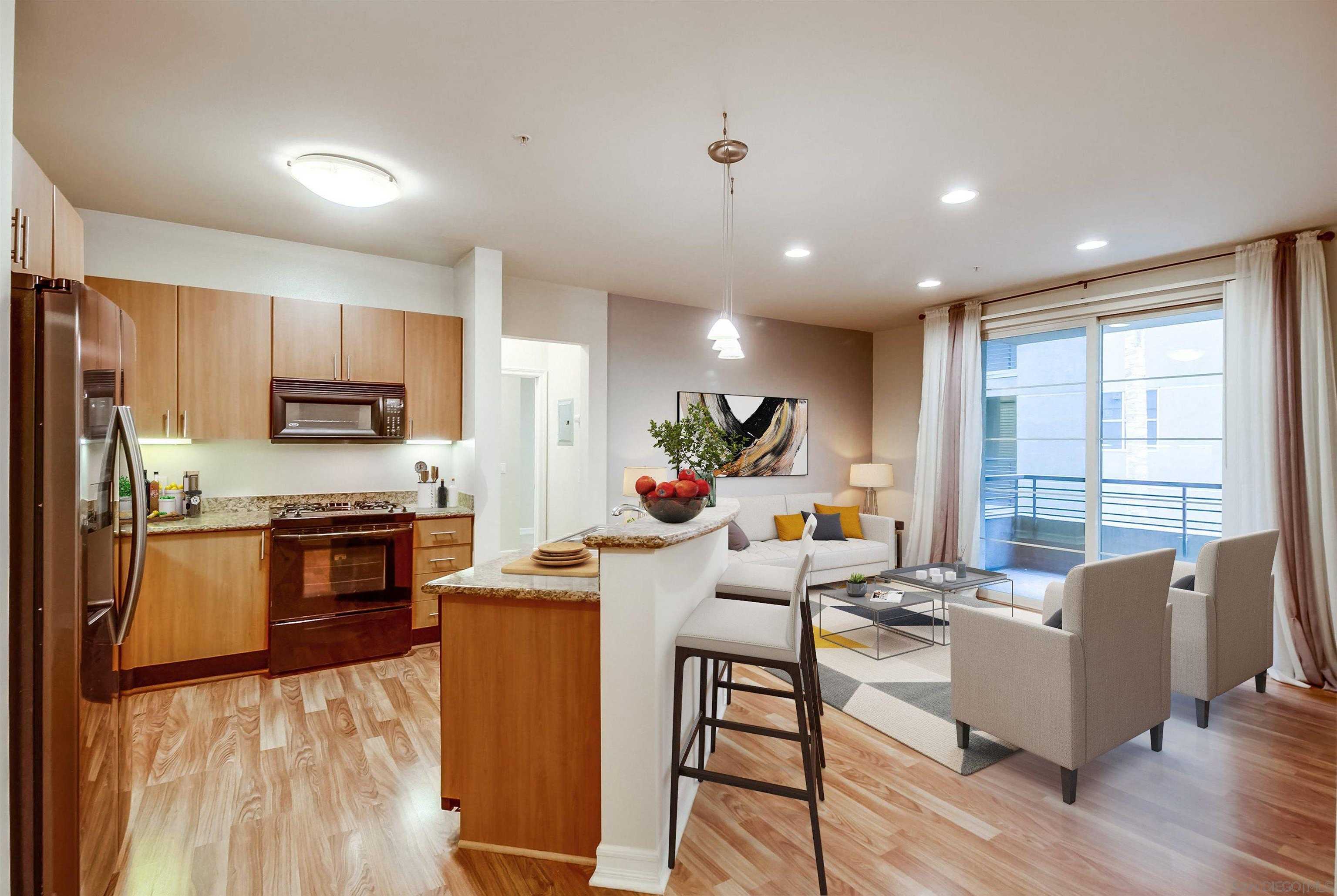 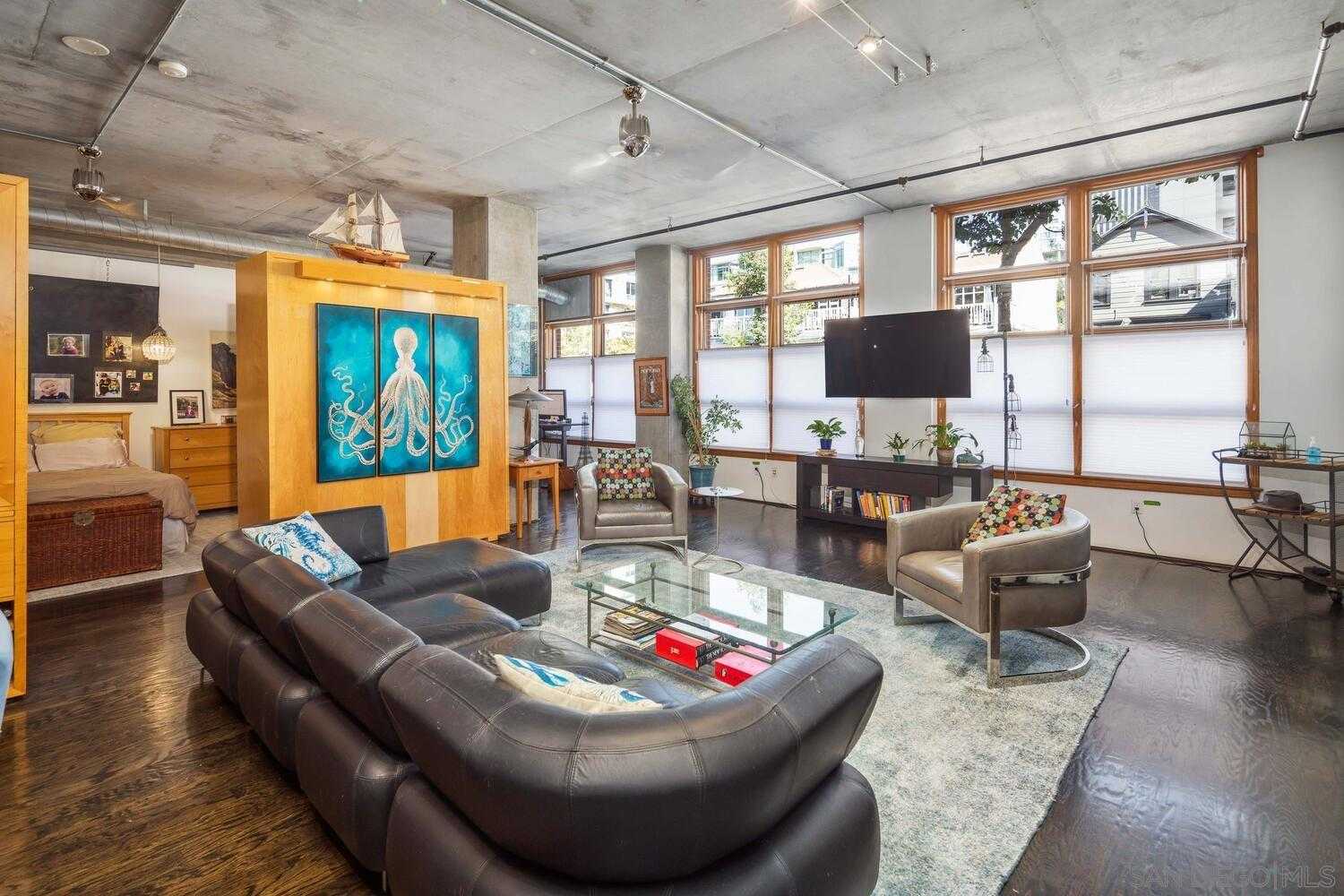 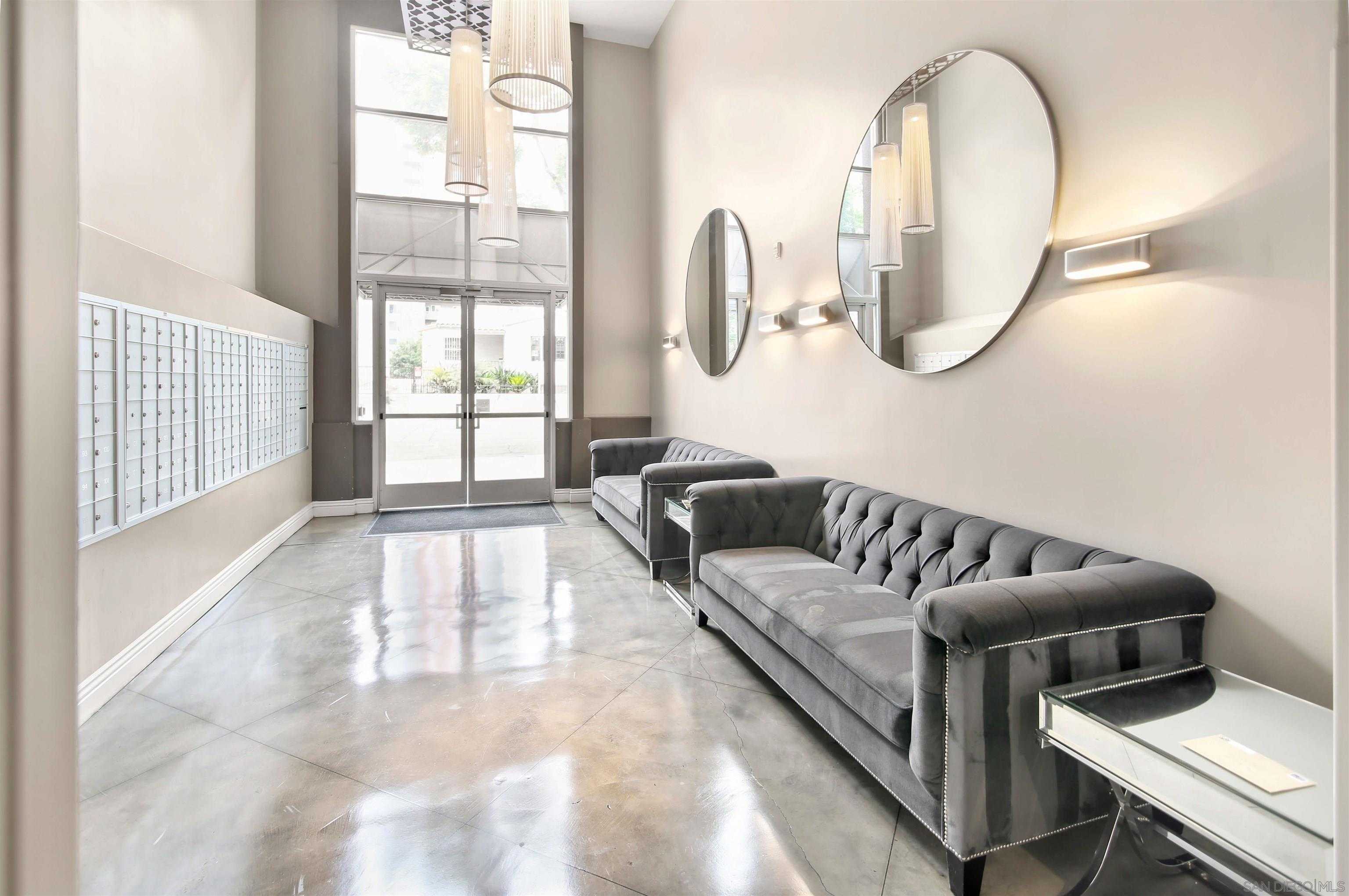 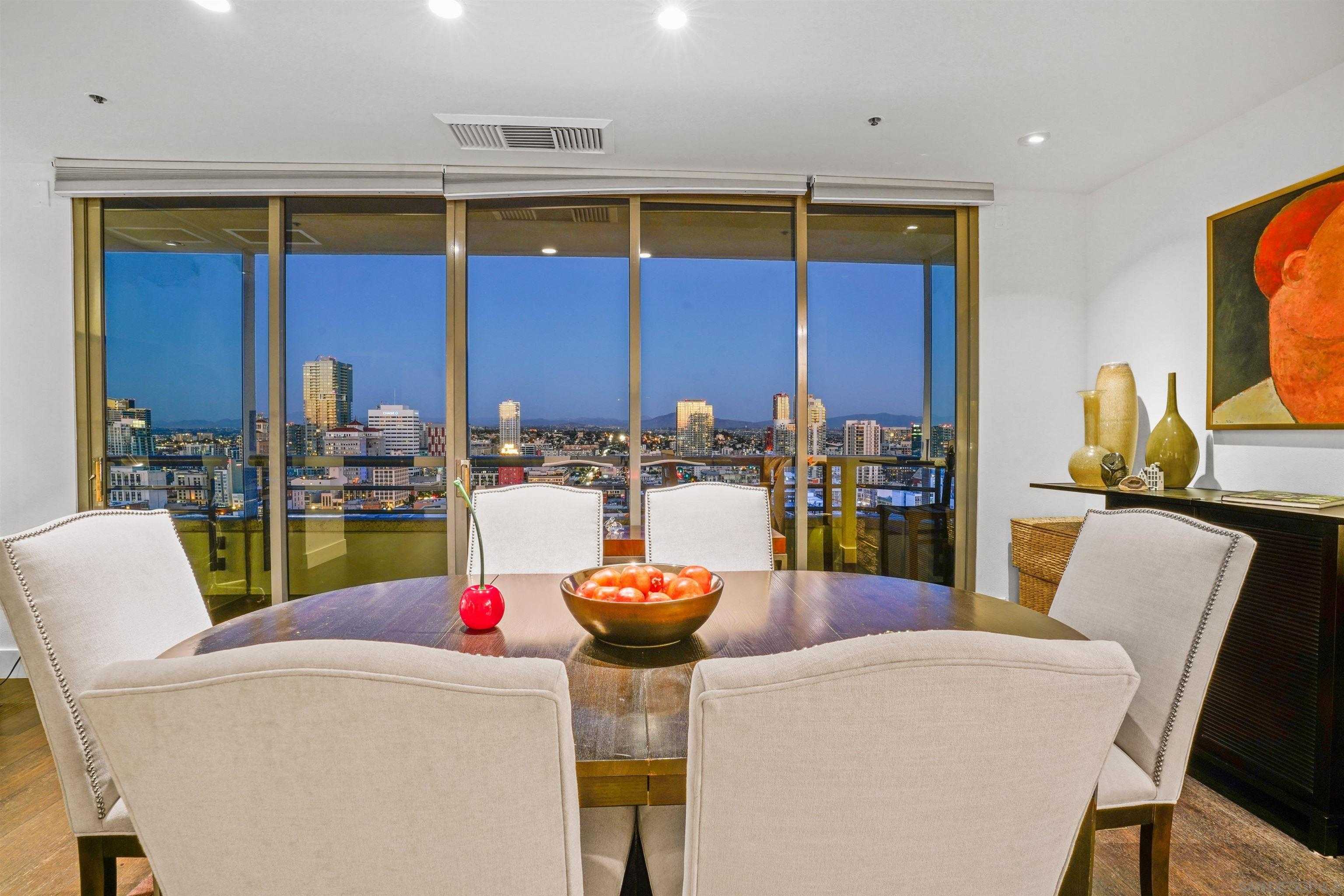 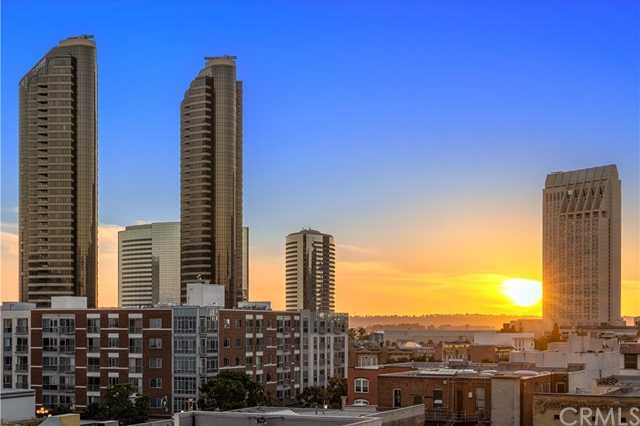 New
$474,900
1 Bed
1 Bath
679 SqFt
Status Active
MLS # OC21230095
Property Type Attached
Price Type --
Coldwell Banker Realty
Investors (30 day min.), Second Home or Full time home! This very bright one bedroom with city views on the 4TH floor of the ALTA Bld in the heart of downtown living! Walk to a ball game at PETCO Park, enjoy the gaslamp district or many of the downtown restaurants. On 4th of July you can watch FIREWORKS from your balcony! This condo has an open floor plan and a large south facing patio. Once you enter the unit you see a wall of windows, wood laminate flooring, stainless steel appliances and kitchen with grey cabinets with frosted glass. HOA covers the water and trash. The ALTA building offers many amenities: pool/spa, gym, community room and a secure building. Close to many freeways 94, 163 and the 5. You also have a covered parking and a storage unit (5X3). Appointments Only!
View Property 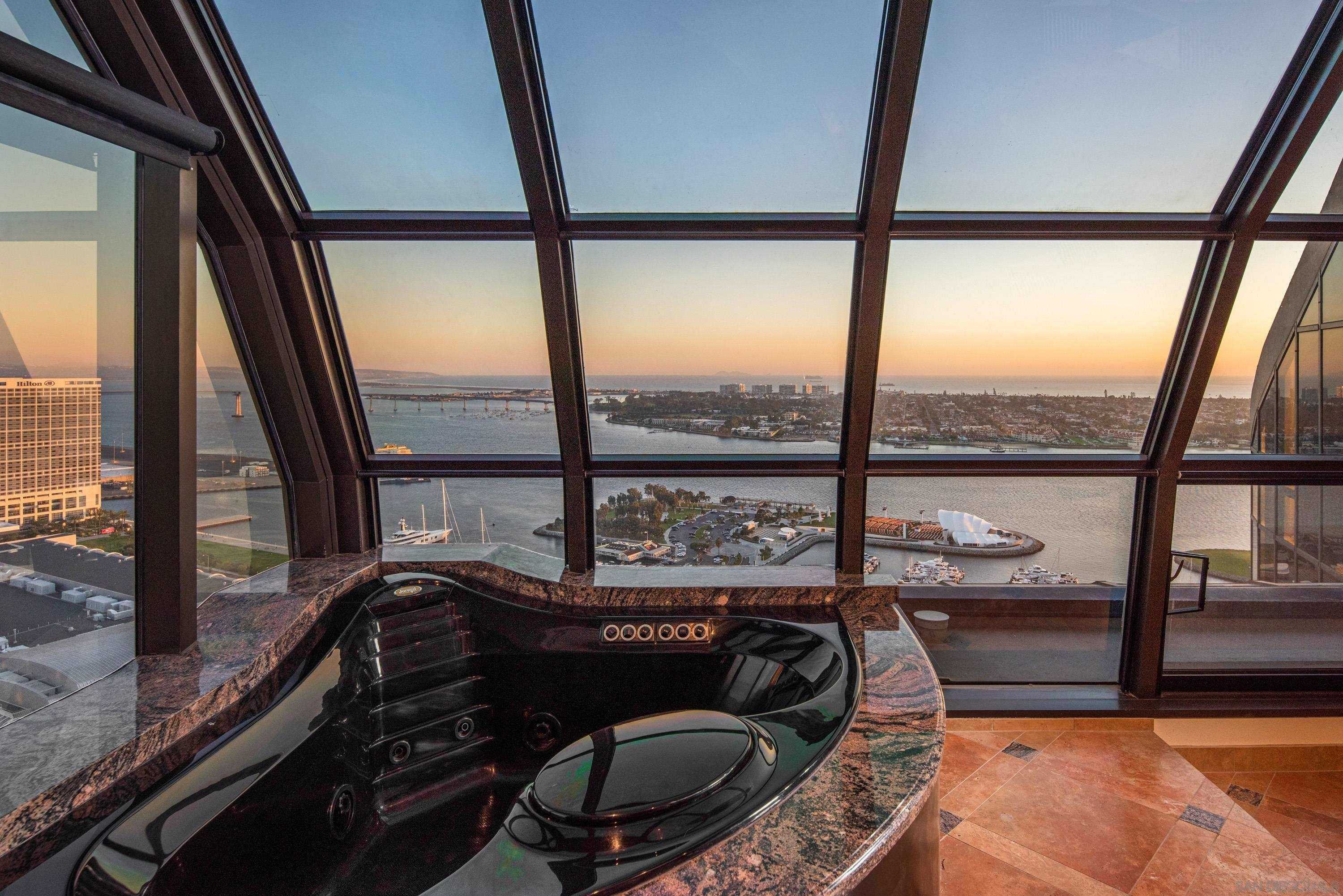 $3,950,000
3 Beds
3.5 Baths
3,662 SqFt
Status Active
MLS # 210029162
Property Type Attached
Price Type --
Compass
Welcome to the most iconic address in Downtown San Diego - The Harbor Club. This 40th-floor penthouse takes up the entire level and has stunning 360-degree views of SD, Coronado, Point Loma and clear out to Mexico. As you step out of the elevators, you're welcomed into your private foyer that only you can access. As you step inside, you're quickly drawn to the incredible views and floor-to-ceiling glass that connects you to your surroundings -from the dual living rooms and double-sided gas fireplace, to the jacuzzi tub and steam shower, or the sauna room and custom California Closets...this glass-walled penthouse has been exquisitely renovated. All the light fixtures have been updated to LED lights, the kitchen has all new gas appliances including dual refrigerators/freezers. There are three HVAC systems with Nest thermostats, power shades throughout and even a laundry/utility room that has your own refuse chute. Enjoy the surround sound system and the new wine frig while you unwind and appreciate San Diego's beauty. Full-floor opportunities like this rarely come around and fewer have this level of unobstructed, protected views.
View Property 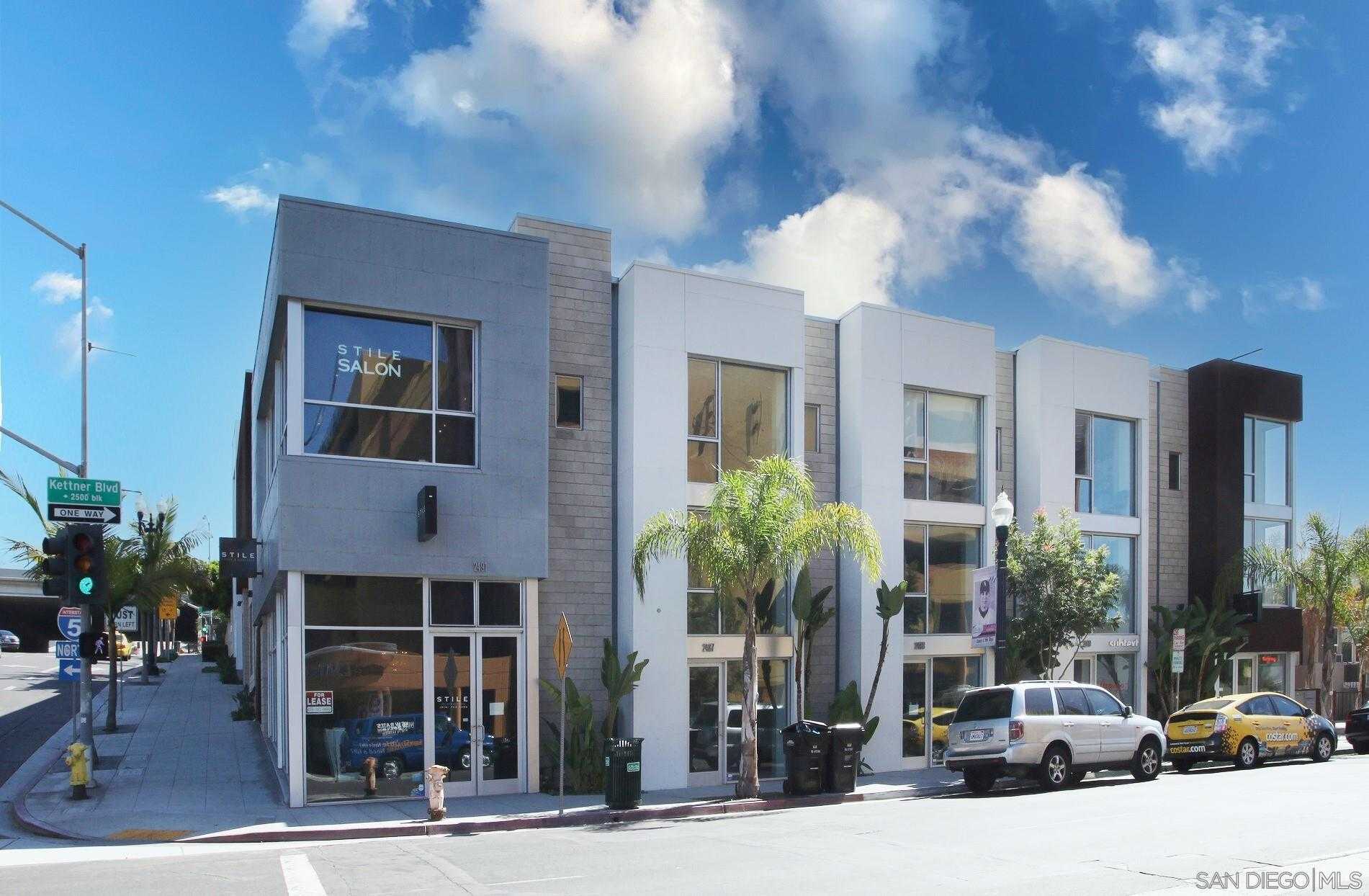 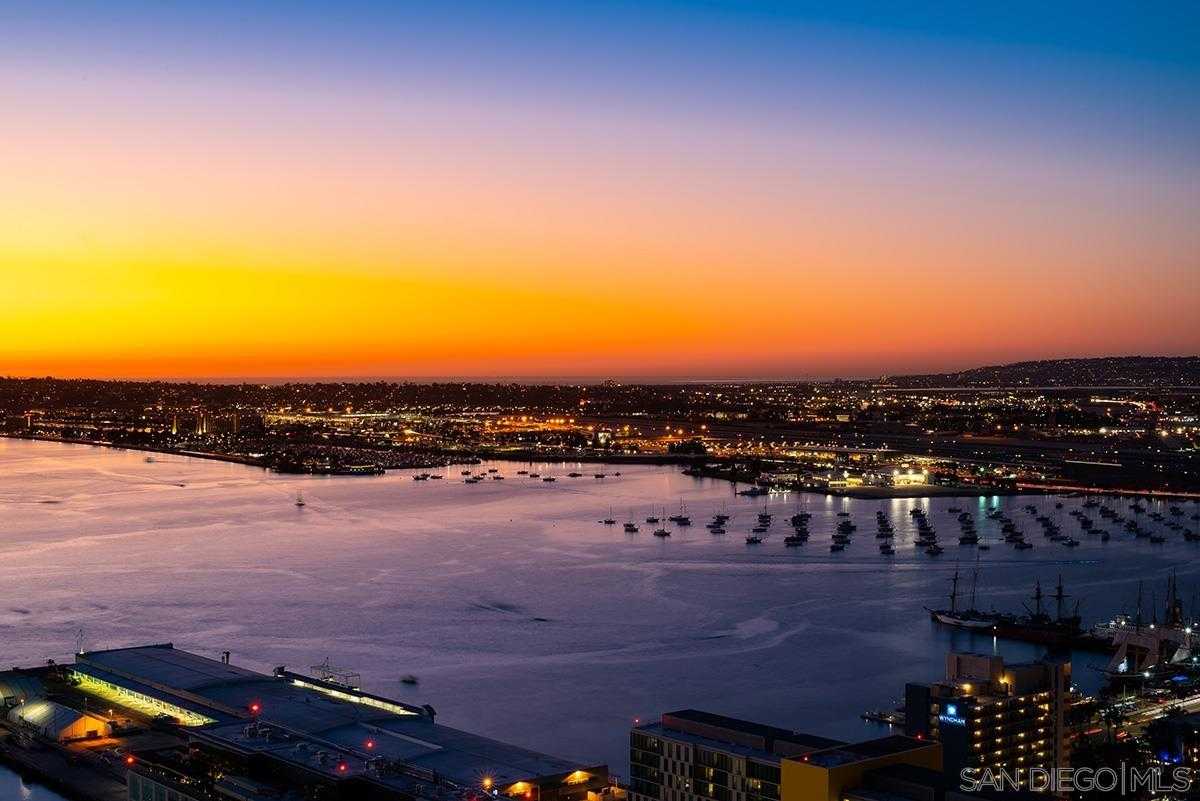