Point Loma is a mostly upscale community within the City of San Diego. Point Loma real estate is expensive, with entry level houses starting in the $800,000’s. Townhomes and condos for sale starting around $400,000. But if you’re looking for homes near downtown San Diego with ocean views and lots of character, Pt. Loma is a great place to look.

As you explore Point Loma real estate, you’ll want to check out the Loma Portal, Roseville, Plumosa Park and La Playa neighborhoods. One of a kind, custom homes on larger lots can be found in the “wooded area” near Silvergate as well as in La Playa. Pt. Loma has many luxury homes and exclusive multi-million dollar estates with breathtaking and panoramic views of the downtown San Diego skyline, harbor, and ocean.  Many of the houses here were built in the 1940’s and 1950’s in old Spanish style.

If you prefer newer construction, then you’ll love the Point Loma homes at Liberty Station, the redeveloped Naval Training Center. Liberty Station is a master planned community of single family homes, condos, and townhomes. There is lots of open space, with shopping, schools, and entertainment within walking distance. Liberty Station has a 46 acre waterfront park, executive golf course, and boat channel, and is home to High Tech High School, Explorer Elementary and The Rock Church.

Point Loma is found on the long finger-like peninsula that guards the entrance to the San Diego Bay. The crest that runs along the peninsula gives the majority of homes in the community either a commanding view of the downtown San Diego skyline and harbor to the East or the mesmerizing Pacific Ocean to the West. Many people recognize the Pt. Loma community for its brilliant cliffs, private coves, and Sunset Cliffs Natural Park that extends along the Pacific Ocean side of the peninsula.

About one third of Point Loma real estate in zip code 92106 is federal land. Cabrillo National Monument, the Pt Loma Lighthouse, and the Tide Pools are located at the southernmost tip of the community. Fort Rosecrans National Cemetery and the Naval Base is just north of Cabrillo. Residential neighborhoods start north of there.

The population of Pt Loma is slightly over 20,000 residents and there are about 8300 homes in the community. You’ll find Point Loma homes for sale include older beach cottages as well as newer custom homes. Much of the original home construction here took place in the 1920’s and 1930’s there are many historic and charming vintage homes such as Spanish Revivals and California bungalows. Point Loma is classic San Diego real estate.

The Point Loma community has the ambiance of an old seaport with close proximity to the beach, yet within close proximity to downtown San Diego. Access to cultural events in downtown, maritime activities, and the beach add value to real estate in the area. Locals and visitors enjoy picnics and bay-side fishing at Shelter Island Park, or boat watching at Harbor Island Park.

Talk to The San Diego Realty Pros about this special community. We’ve been top Point Loma Realtors since 1999! Let us show you more about what Point Loma has to offer! Call 619-200-7612. 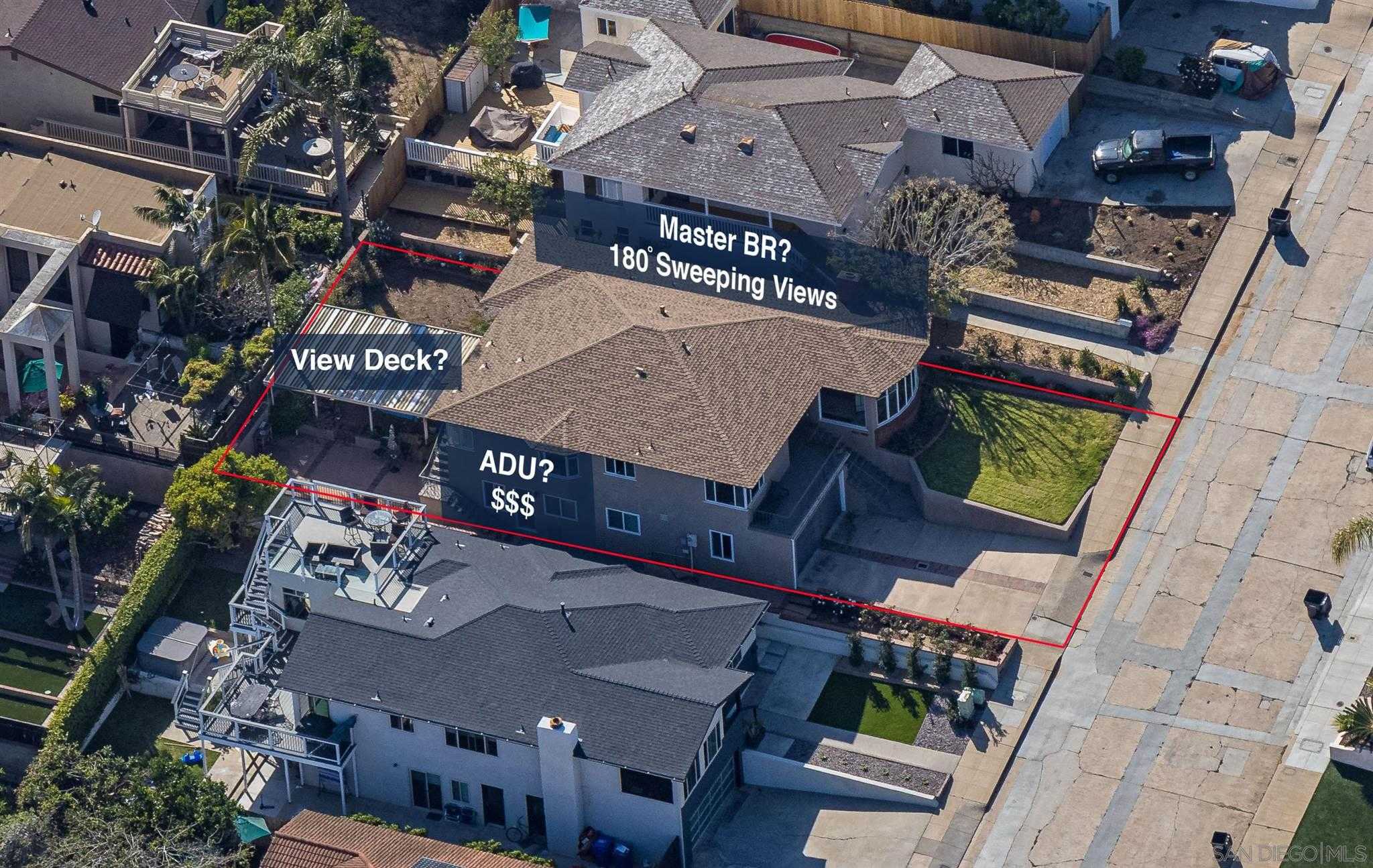 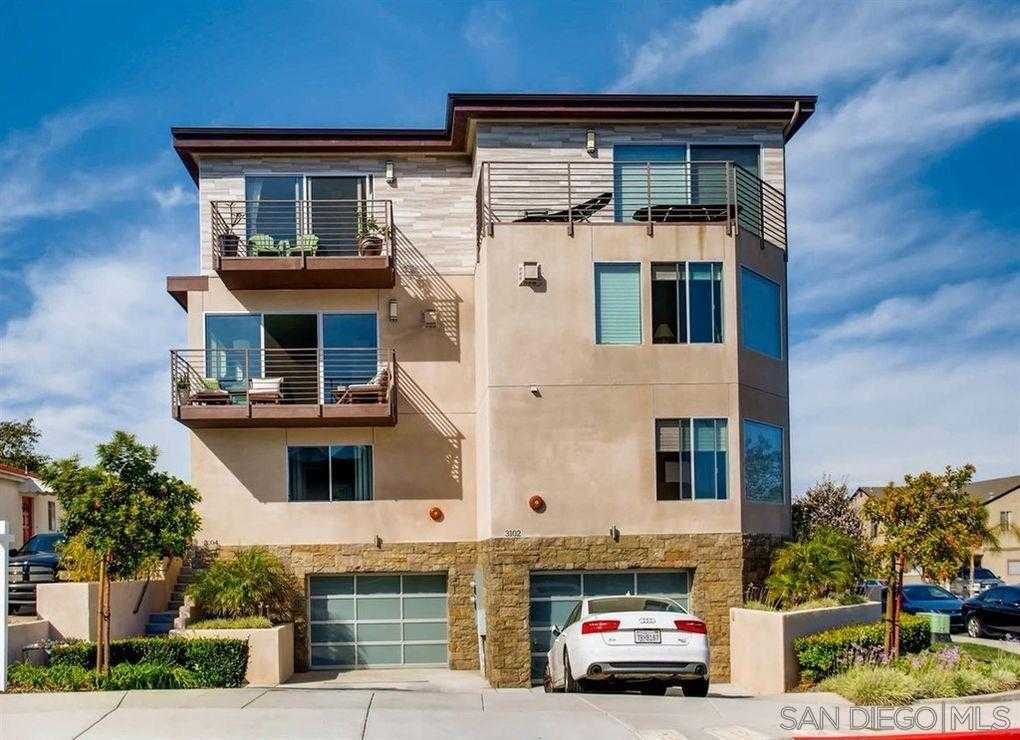 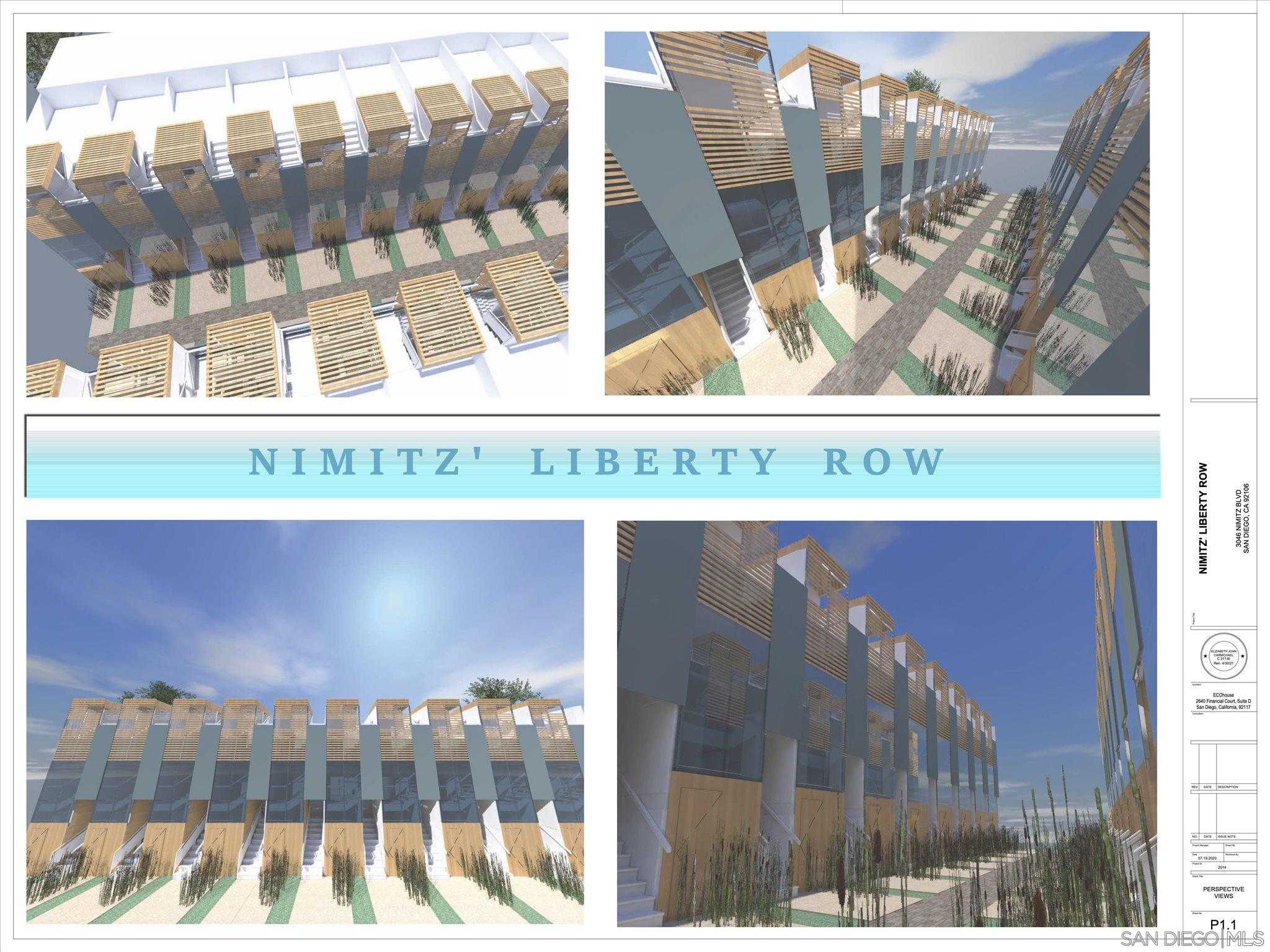 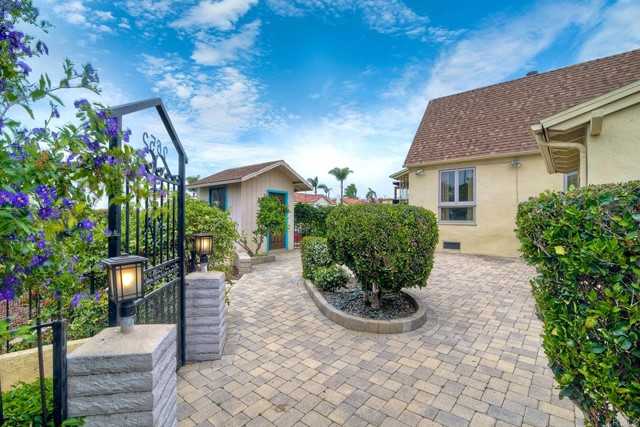 $1,499,900
5 Beds
3 Baths
2,286 SqFt
Status Active
MLS # PTP2102475
Property Type Detached
Price Type --
Tidal Realty
Amazing views of Downtown San Diego and the Bay! This beautiful property, with the driveway and garage entrance off of Elliot St., offers 4 bedrooms and 2.5 baths with a separate entrance to the attached ADU/granny flat. No expense was spared with this property. The whole house has been recently re-plumbed including the replacement of the old cast-iron main line going all the way to the street. Newer roof, newer windows and updated flooring and lighting throughout. Recently installed wrap around enclosed porch. This is a must see!
View Property 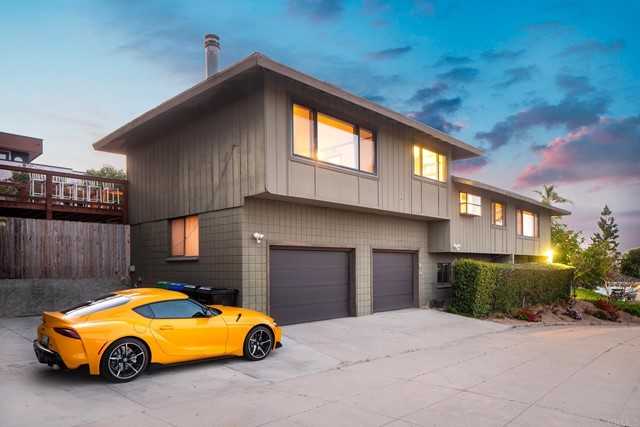 $2,195,000
5 Beds
3.5 Baths
2,912 SqFt
Status Active
MLS # PTP2102969
Property Type Detached
Price Type --
San Diego Estates
At the top of the Point Loma Portal, this home has views to spare! Large double windows allow for a quiet home with stunning views of Coronado, Coronado Bridge, Downtown San Diego Skyline, San Diego Bay, Mexico, San Miguel Mountain, Cowles Mountain, Seaworld Sky Tower, Seaworld Fireworks (when applicable), and the Pacific Ocean. The double front door entry invites you into the beautifully tiled main level of the home. The level includes three bedrooms and two and a half baths, very large living room, dining room, kitchen, and solarium. The kitchen is custom designed with granite countertops that blend seamlessly into granite back splashes, stainless steel appliances, gas stove, breathtaking wood cabinets, and walk in pantry. The top level is complete with exquisite wood finishes in the wall to wall cabinetry, fireplace, and bookcase and is also equipped with a large full wet bar including a fridge and cabinets to spare. The bar is mere steps away from a large outdoor deck which offers an unobstructed downtown San Diego view. Other amenities include the laundry room complete with a view which may easily convert into a home office with the perfect San Diego Skyline backdrop for video meetings. All 2,900+ sqft. of this home are optimized to the highest potential. The blueprints and build allow for an additional entrance to the lower level of the home, which may almost effortlessly evolve into Additional Dwelling Units. Part of the lower level is already walled and floored with two bonus rooms and one full bath, complete with yet another ocean view. Sellers are motivated and wi
View Property 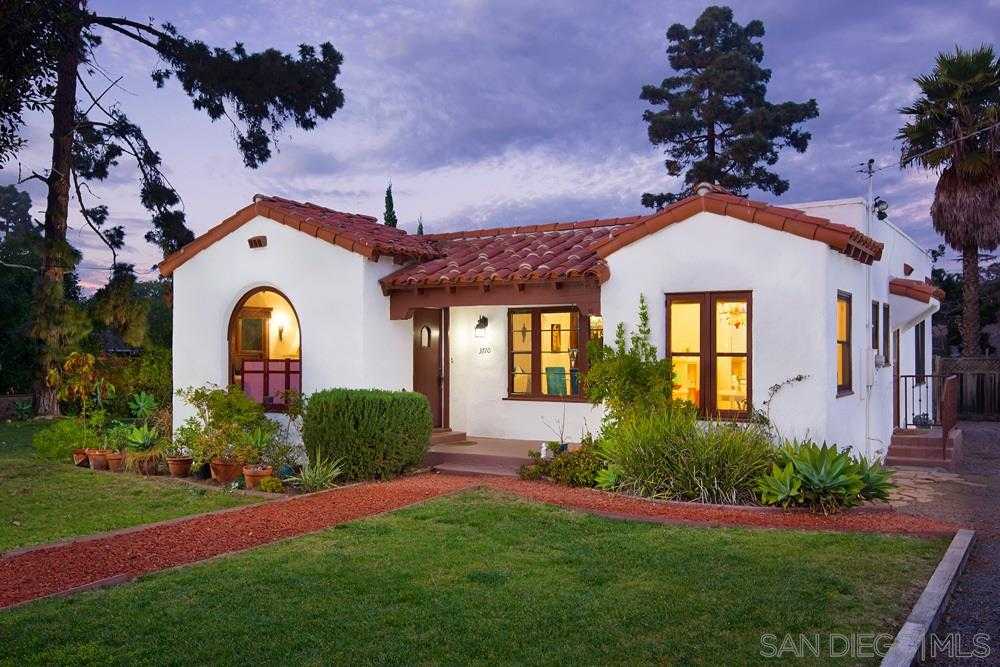 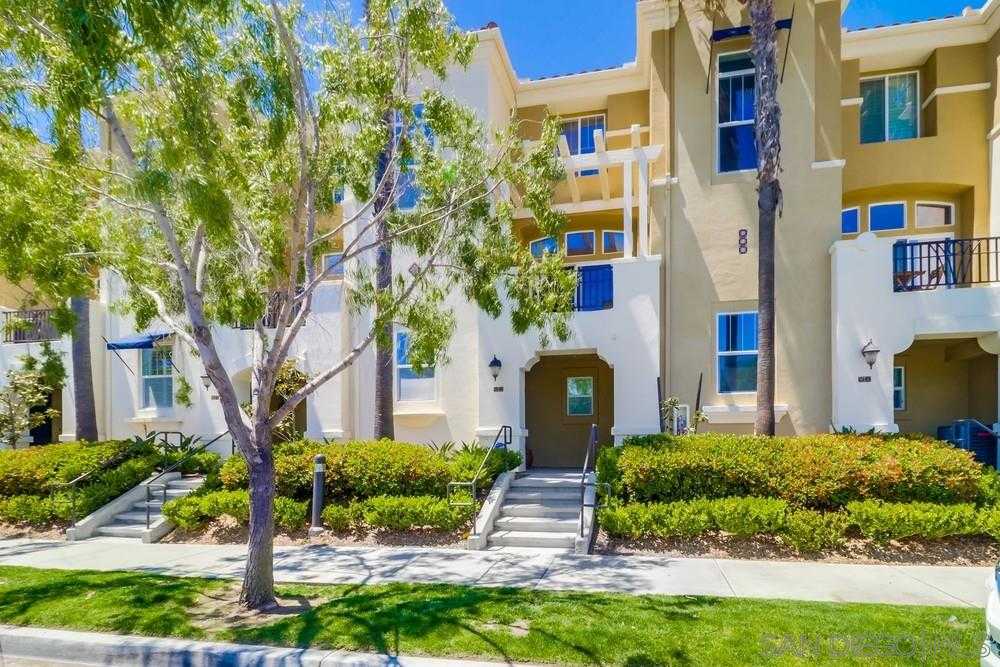 $880,000
2 Beds
2.5 Baths
1,101 SqFt
Status Pending
MLS # 210011531
Property Type Townhome
Price Type --
Big Block Realty, Inc.
Amazing townhome in Liberty Station. This is 1 in 11 units out of 140 that have a view of the park, the bay and downtown San Diego! Facing NTC park with stunning views of San Diego Bay, downtown San Diego and the Coronado bridge. Original owners from 2004! This townhomes are hardly ever on the market! Upgraded kitchen and more. This location is prime and a perfect example of San Diego living! So many great restaurants, shopping, stylish bars, museums, the park, a high end movie theater and even a golf course all within walking distance like Liberty Market, Trader Joe's. All the high tech school are in this community as well! This is a must see that won't last! New Stainless steel appliances with quartz counter tops in kitchen and bathrooms and beautiful backsplash.
View Property 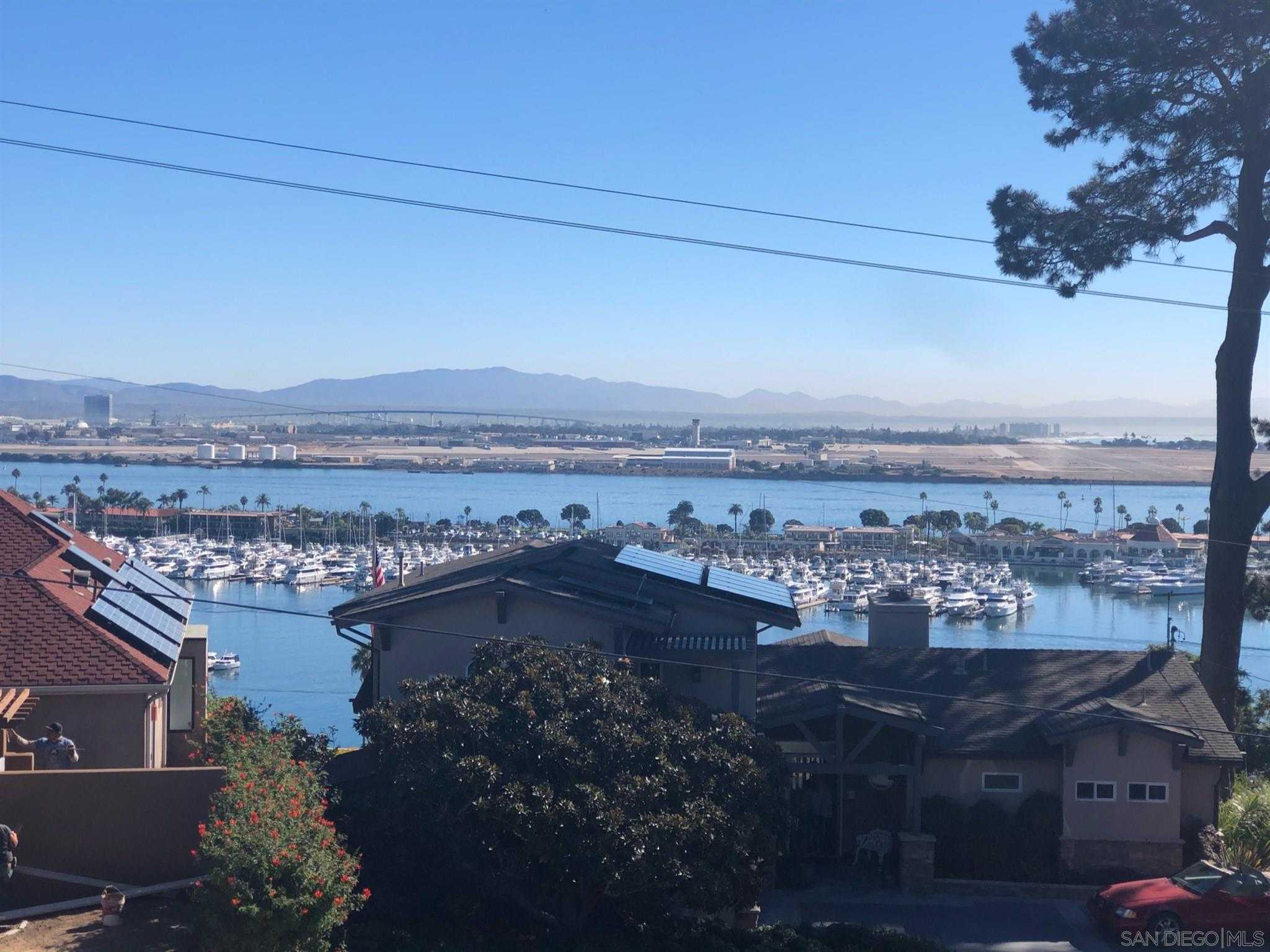 $3,500,000
5 Beds
5 Baths
4,345 SqFt
Status Pending
MLS # 210010319
Property Type Detached
Price Type --
Compass
Welcome to Point Loma's historic La Playa Neighborhood. This Beautiful 5BR/4.5BA newer home, has that incredible Spanish Architecture and feels as if the property has been positioned at the top of San Elijo for the last 80+ years. With great views of the Bay and downtown wait until you see the view from roof top deck! It's a great home for a family or a professional couple that like to entertain. The disappearing doors that lead out to the decks are great for indoor outdoor living or just admiring the stunning views.
View Property 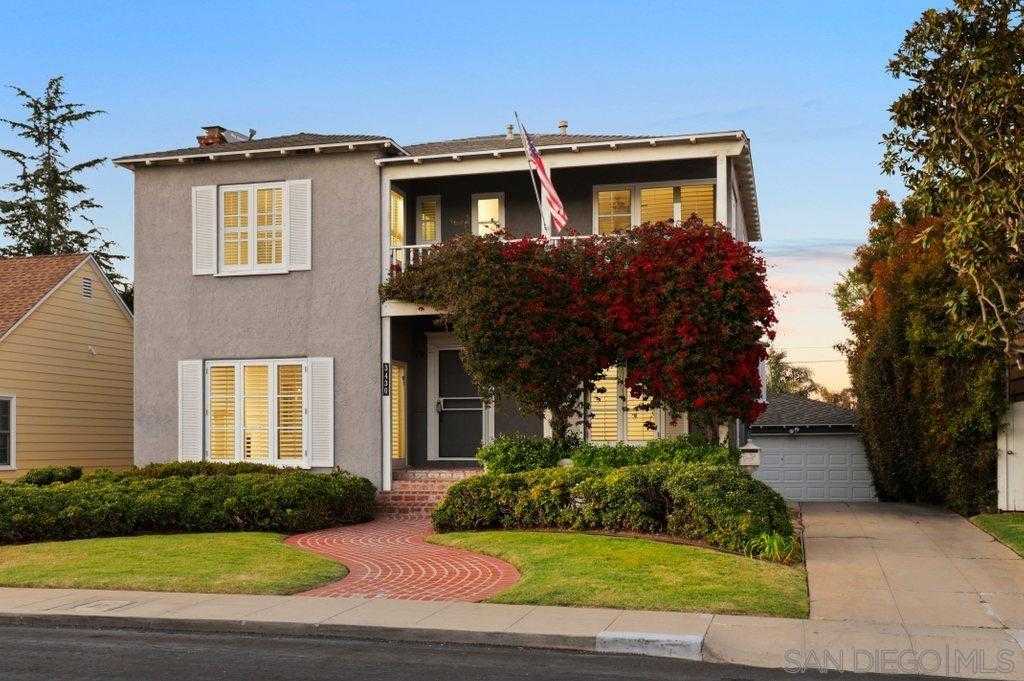 $1,320,000
4 Beds
2.5 Baths
2,368 SqFt
Status Pending
MLS # 210011399
Property Type Detached
Price Type --
Redfin Corporation
Rare opportunity to own a home in the highly sought after Loma Portal Neighborhood! This charming home features: an exterior painted with rhino shield elastomeric coating (that comes with a 14 year warranty), three spacious bedrooms and three full bathrooms, an abundance of natural lighting, a large balcony attached to the master bedroom, a family friendly backyard perfect for entertaining, a quieter home program completion with new windows and HVAC system, and so much more! The home is located less than a mile from Liberty Station which is known for its charming eateries, markets, stylish bars, and shops. Enjoy top rated schools, a family friendly neighborhood and all that Point Loma has to offer!
View Property 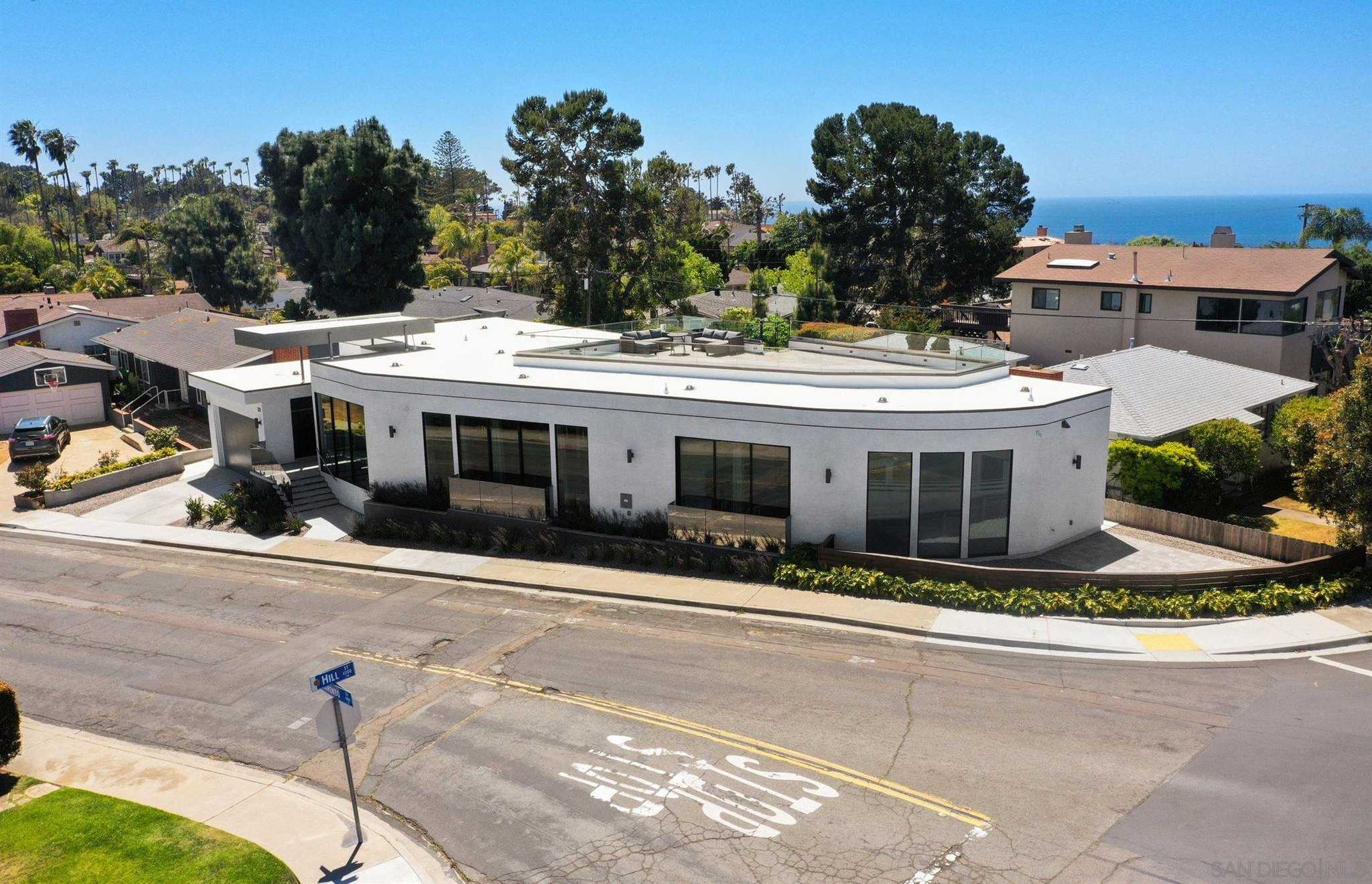 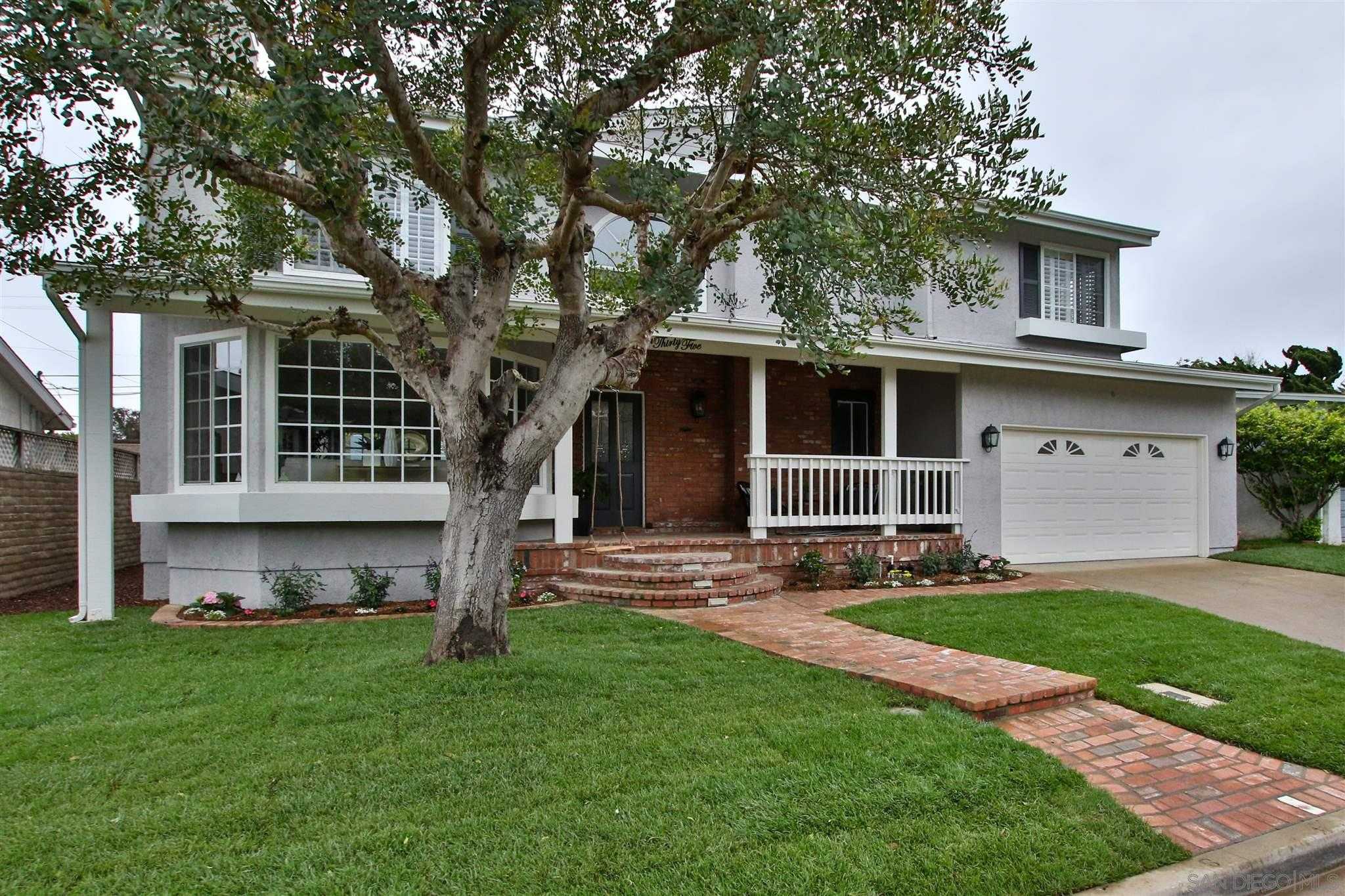 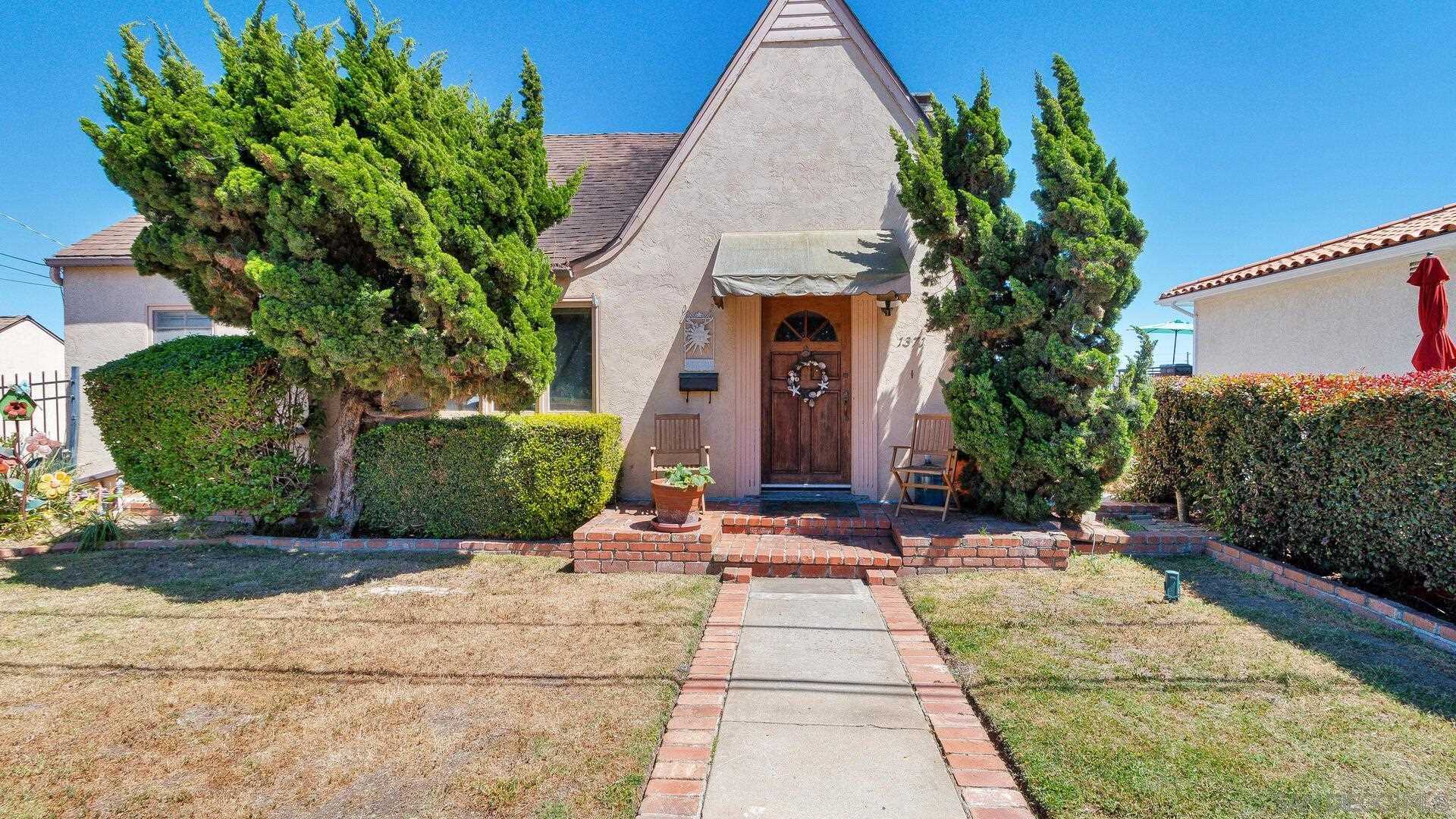 $1,195,000
4 Beds
2 Baths
1,561 SqFt
Status Active
MLS # 210010904
Property Type Detached
Price Type --
Berkshire Hathaway HomeService
This 4 bedroom 2.5 bath home has amazing harbor views. Enjoy the beautiful views and the sound of the Pt Loma parrots while you sit on your balcony drinking coffee in the morning! This corner lot feels spacious and full of possibilities with a large detached garage. It’s a short walk to the harbor and Pt Loma Village and close to Liberty Station. There are countless restaurants, great shopping and activities to explore. If you have a boat, you can keep it at a close marina or yacht club for convenience. So much potential in this home. The fourth bedroom has been converted to a den/office space upstairs.
View Property
More Listings in 92106, San Diego, CA